CyITP is developed in the R Programming language and is an open source project. The code is available at https://github.com/cyipt. CyIPT consists of two main parts; the R based analysis code, and the website, which is a mixture of HTML/CSS/JavaScript with a PostgreSQL database accessed via a PHP-based API.

This manual focusses on the R based analysis code, as the website exists purely for visualisation and ease of use.

CyIPT is reliant on some pre-existing datasets from third parties. While many of these are publicly available, CyIPT required them to be pre-processed before use. These scripts are provided for context, but in most cases, users should download the pre-processed data directly from GitHub.

The CyIPT master script https://github.com/cyipt/cyipt/blob/master/scripts/cyipt.R can be used to run the whole CyIPT process. It manages several global settings.

Should the code skip regions that have already been done?

Some stages overwrite existing files, for example by adding an extra column of data. Note that not overwriting may cause later stages to fail if they expect earlier stages results to be in the starting file.

Some functions use parallel processing how many clusters should be run? This should be less than the number of cores on your computer.

Get extra messages and information while CyIPT is running.

Ignore the regions to do file and run for all regions.

Placing y in the do column of this csv file will rerun the that region.

CyIPT uses the 2011 travel to work areas produces by the Office for National Statistics (ONS). Other boundaries could be used in the future.

CyIPT requires the following R libraries, which can be installed as follows:

and loaded as follows:

This script downloads the OSM road and path network for each region.

This script “cleans” the OSM data by removing or correcting errors and filling in missing data with best guesses. Guessing is required, as some later stages of CyIPT require information (such as speed limits) which is not always available. In isolated cases of incorrect guesses it is best to correct the value in the OSM using the “edit in the OSM” button on the CyIPT website. These corrections will then be incorporated into the next build of CyIPT. In general cases of CyIPT miss-guessing, please submit and issue via GitHub https://github.com/cyipt/cyipt/issues

The cleaning process consist of the following stages:

This script assigns the point traffic count data to the road network.

This scrip divides the point traffic counts based on whether they are on classified (e.g. M21, B340) or unclassified roads. Unclassified road points are matched to the nearest road in the OSM, and therefore the value only extends a short distance from the point location. For classified roads, a series of Voronoi polygons are constructed around the points and all the road segments within each polygon are assigned the value of their nearest point. This provides continuous coverage, but can produce some erroneous results such as off ramps having the same traffic levels as the main carriageways.

In both cases, the script takes the Annual Average Daily Traffic (AADT) value from the most recent available year. For the strategic road network, data is mostly from 2015/2016, but for minor roads, it can be significantly earlier. For the purposes of CyIPT is the traffic data is mostly used for identify the very busy and most hostile roads, thus this inconstancy of data is not a significant problem. However, users intending to use the data or method for other purposes should consider the implications of this inconstancy within the data.

5.9 Step 4: Split the lines at each junction

This script splits the roads at each junction into road segments.

The splitting of the roads at junctions is mostly required for the later application of the PCT data. Within the OSM a road may be represented by a single long line crossing several junctions. However, at each junction cyclists may join or leave the road. Therefore, it is not appropriate to analyse the road network as it is represented in the OSM. By splitting the road network into segments it ensures that, the analysis is appropriately detailed. Note the splitting is done by cutting tiny holes out of the road lines (r = 0.01m) therefore the lines are no longer touching; this would prevent this dataset being used in a routing engine.

5.10 Step 5: Get the PCT estimate of number of cyclists

This script matches the Propensity to Cycle Tool (PCT) LSOA route data with individual road segments to count the number of cyclists on each road segment. Values from each of the five PCT scenarios are recorded:

While the matching process is reasonably robust, small errors can occur resulting in missing segments, or double counting.

As the PCT data was unidirectional routed (A to B, but not B to A) the results are less accurate on dual carriageways. For example, the PCT is constructed from Census 2011 Origin-Destination data matched to routes produced by CycleStreets. The Origin and Destinations are Lower Level Super Output Areas. The census state that 30 people live in LSOA A and work in LSOA B, and 50 people live in LSOA B and work in LSOA A. The CycleStreets provide a route from A to B, and the PCT assign this route a value of 80 (50 + 30). This method does not therefore take account of the route A to B being different from the route B to A, due to one way streets, roundabouts etc. Nor does it consider that commuters return home at the end of the day.

In these cases, the number of cyclists is split between the carriageways with usually with most on one carriageway (see Figure 5.1). 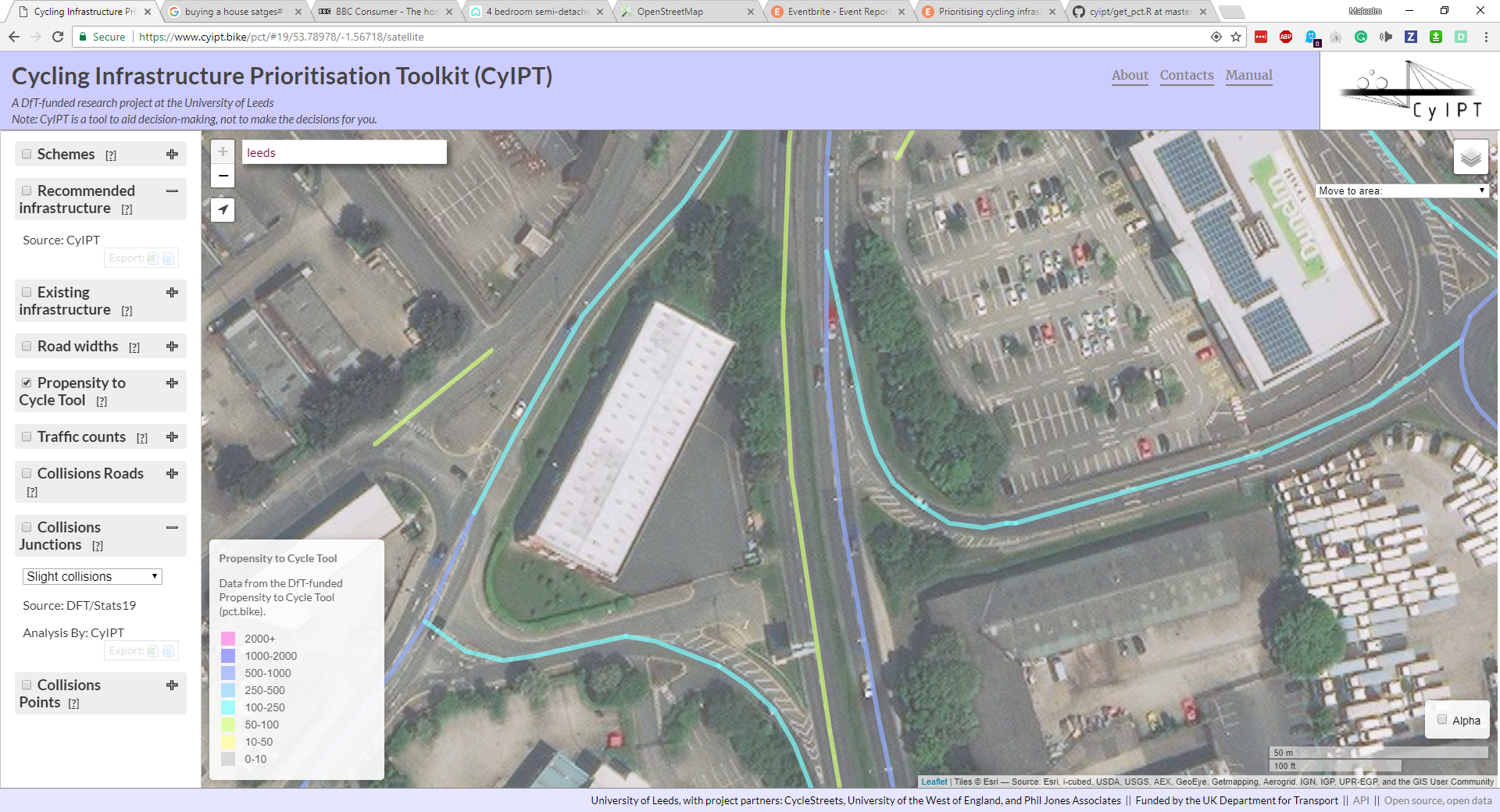