The CyIPT website is an interactive map presenting a range of different layers.

The Existing Infrastructure layer has three modes (Cycle infrastructure, Speed limits, Footways). These modes are intended to help the users understand the current level of provision for active modes, and can be selected using the dropdown menu illustrated in Figure 4.1.

For each mode, the underlying data is taken from the Open Street Map (OSM), which is then passed through a cleaning process to correct errors and fill in any missing data.

If any values are incorrect in CyIPT (for example an incorrect speed limit) clicking on the road will show a popup including an “Edit in OSM” button (see Figure 4.2).

Figure 4.2: The Edit OSM button in the Existing infrastructure layer (see red circle). The presence of a cycle path is clear from the satellite layer (in the blue circle).

This button should take you to the same road in the OSM website where you can make corrections (alternatively navigate to the path manually on OSM). To edit OSM data you need to log-in (register as a new user at www.osm.org) and then click on the “Edit” button on the OSM website (see Figure 4.3).

Figure 4.3: The Edit OSM button in the Existing infrastructure layer.

This will allow you to change attributes of existing links or, if necessary, add a new link. Figure 4.4, for example, shows how to add a cycle lane to an existing way which was not tagged as having any cycling infrastructure. This will improve the results of CyIPT the next time it’s built. 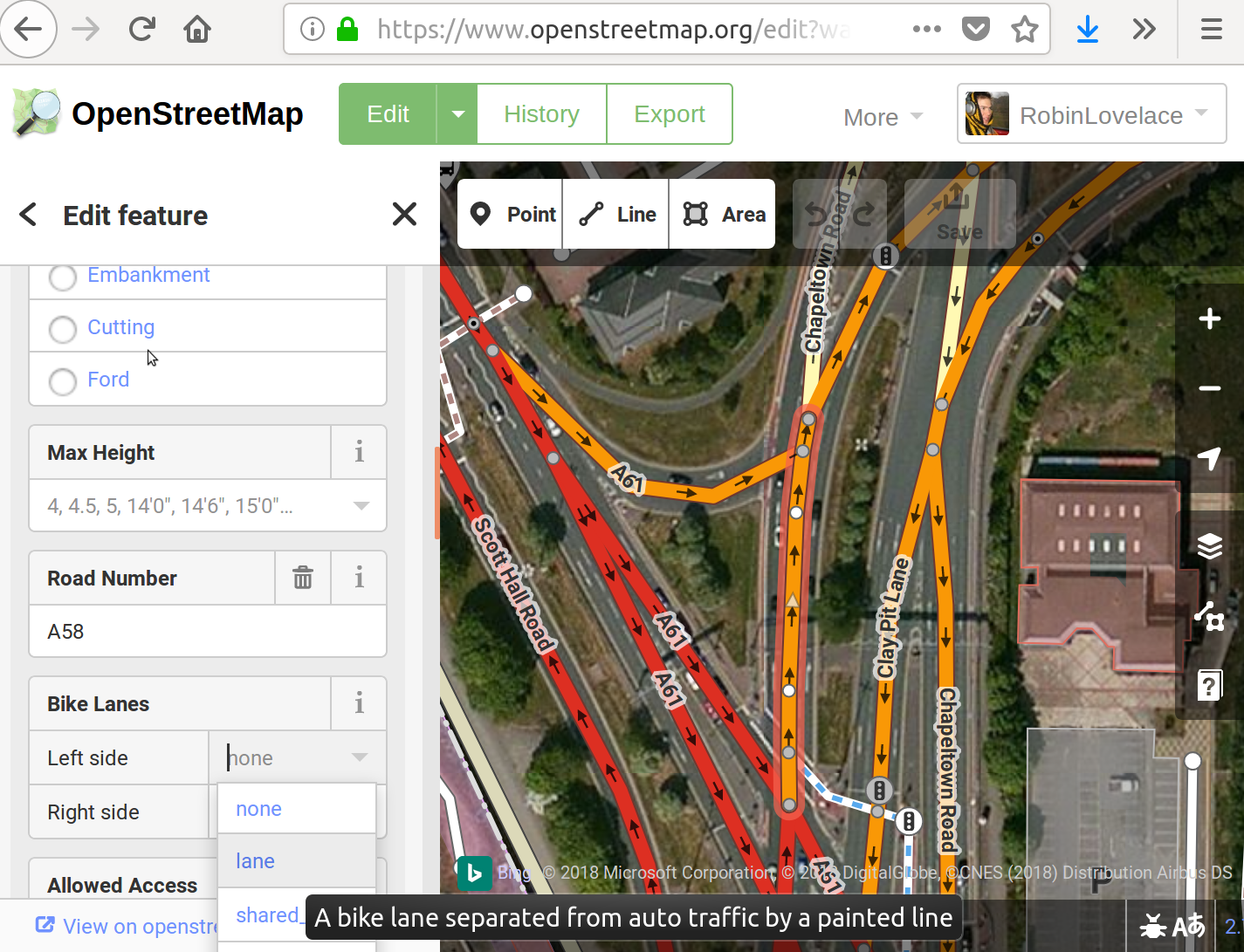 For more information on editing OSM please refer to the following links: 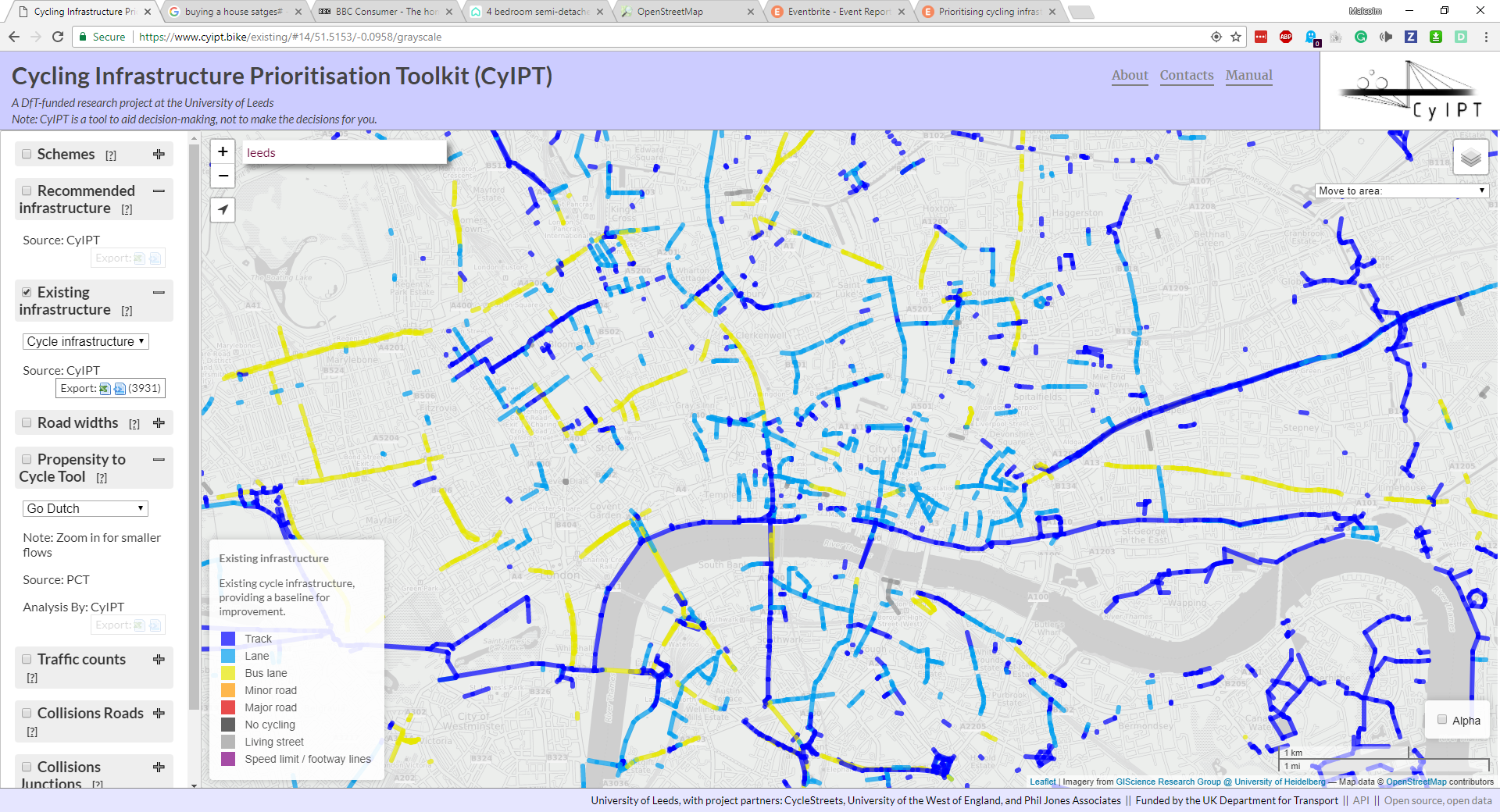 This layer shows what CyIPT will consider existing infrastructure when calculating the costs of new/upgraded cycle infrastructure.

The speed limits mode shows the maximum speed limit in miles per hour.

The footways mode shows the presence of footways (pavements) on the side of the road.

The Schemes and presents the results of the toolkit for route segments, divided-up into geographically cohesive entities (see Figure 4.6. Schemes can be composed of a variety of interventions, which can be: 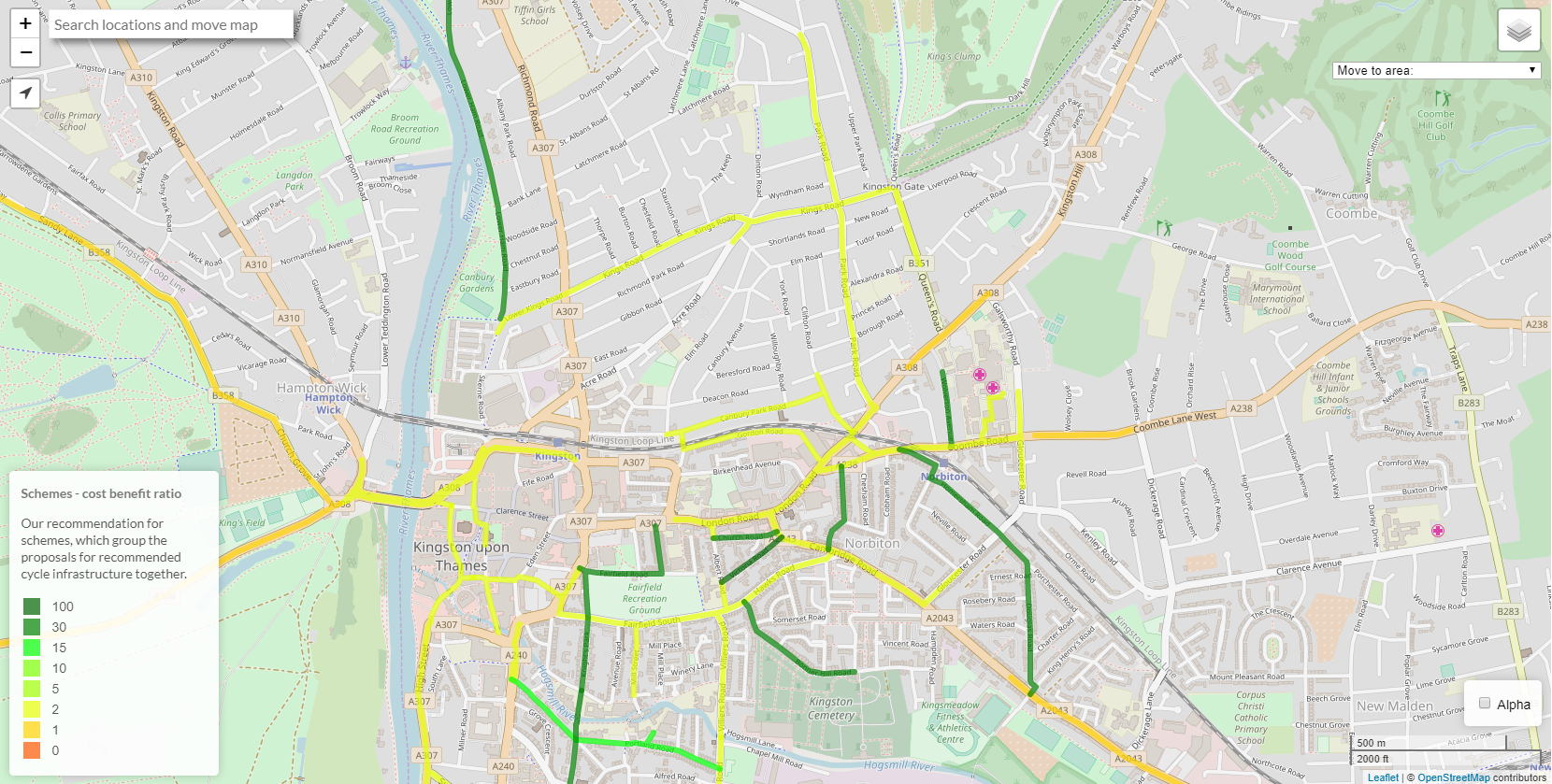 This final list of schemes is evaluated by estimating the increase in cycling due to the new infrastructure and a range of benefits derived from increase cycling. The benefits categories within CyIPT are:

As CyIPT is still in the proof of concept stage, not all the benefits categories have been fully implemented. Therefor CyIPT is likely to underestimate the benefits for a cycle scheme for a given increase in number of cyclists.

The filters within the schemes layer can remove schemes from the map based on Cost, Benefit Cost Ratio, and Total Benefits.

It is important to understand that the CyIPT recommendations are based on cycling levels in the 2011 census, and it may therefore under-represent current cycling levels and infrastructure requirements. For more detail on the recommendation process, see the Technical Details section below.

Appropriate cycle infrastructure is based on guidance from Highways England IAN 195/16 (Highways England 2016). Interventions are recommended for each segment based the following criteria:

Using this information CyIPT makes one of seven possible recommendations. Common infrastructure types are illustrated in the figures below:

(Not shown) no specific cycling infrastructure is required.

A painted line on the roadway divides bicycles from other traffic:

Similar to cycle lanes but batons or armadillos are added long the line to reinforce the separation between cyclists and motor traffic: 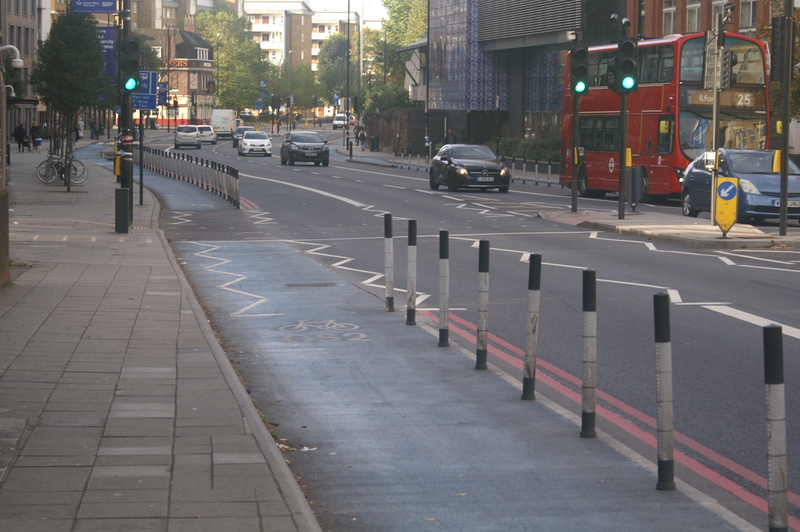 Cyclists travel on a slightly elevated lane, above the road traffic but below the pavement: 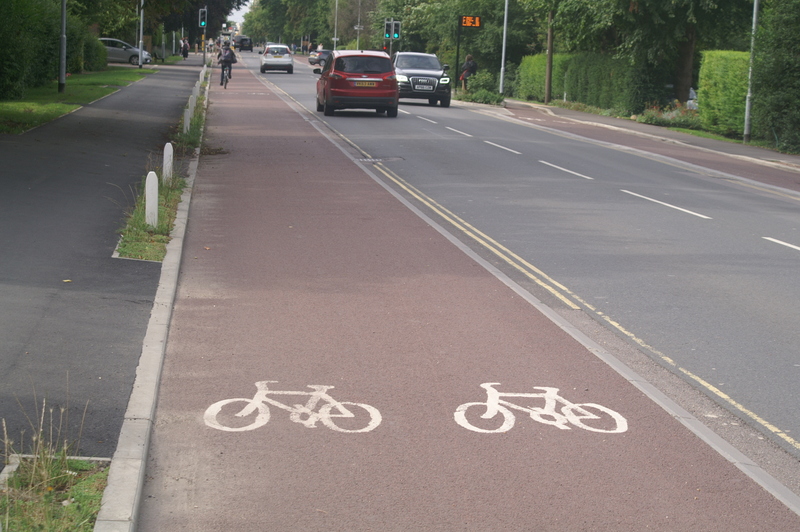 Cyclists travel in a separate lane physically separated from motor traffic by a hard barrier: 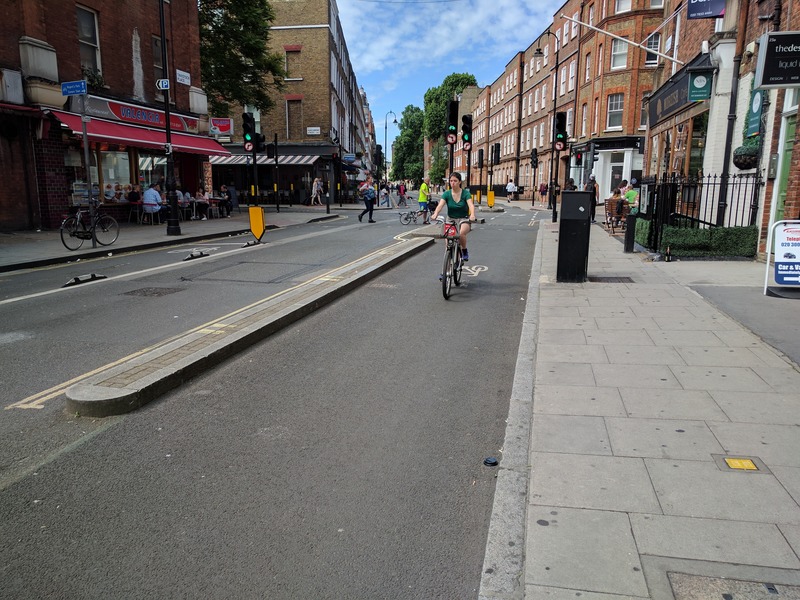 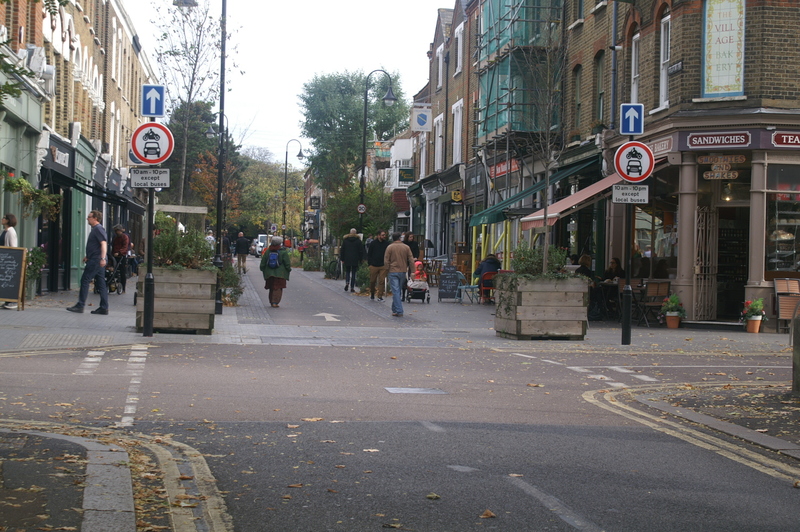 (Off Road Only) cyclists are separated from pedestrians by a painted line.

(Off Road Only) cyclists are separated from pedestrians by a hard barrier.

The road width layer shows and estimate of the road with based on the OSM. The calculation use standard lane widths and information on the number of lanes and footways to estimate the total width of the carriageway. Width status

The Propensity to Cycle Tool layer takes data from the Propensity to Cycle Tool (PCT) (see www.pct.bike) and provides an updated version for CyIPT. The layer is analogous to the PCT LSOA route network layer, which can also be accessed as a base map though CyIPT. CyIPT adds value to the PCT data by assigning cycling potential to OSM elements, making this layer more detailed and interactive than the equivalent LSOA layer in the PCT (see Figure 4.8). 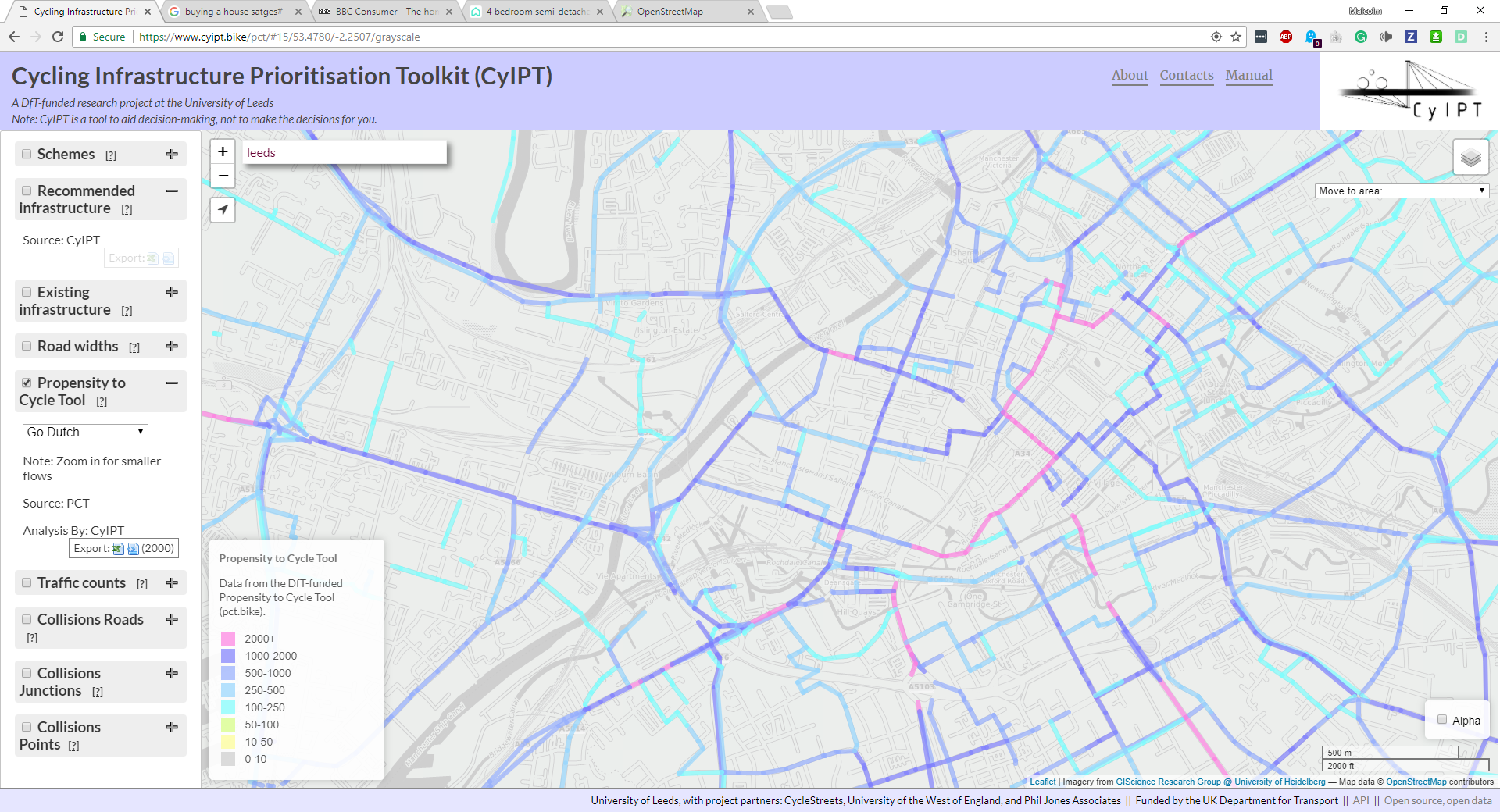 The PCT layer supports the same five scenarios as the main PCT tool, however only the 2011 census scenario is used within CyIPT. The PCT layer includes a value based rate limiting feature.

The PCT scenarios provide a useful way to cross validate the CyIPT uptake predictions. CyIPT typically predict that new infrastructure will increase cycling more than the Government Target scenario, but less than the Go Dutch scenario. Forecasts outside this range should be subjected to additional scrutiny. CyIPT makes no account for ebikes, and therefore the PCT ebike scenario is not applicable, however it is provided in the interest of completeness.

The PCT team is currently working on updated version of the PCT for Wales, and to include travel to schools. These are not currently implemented within CyIPT but may be added in the future.

The traffic counts layer provides an overview of road traffic levels on selected roads (see Figure 4.9). The data source is DfT traffic count data, which CyIPT then matches to the road network. As the DfT data is not provided for all locations in all years, CyIPT takes the most recent available year. As illustrated in Figure 4.9 DfT data has good coverage of the strategic road network, but more limited coverage of minor roads. 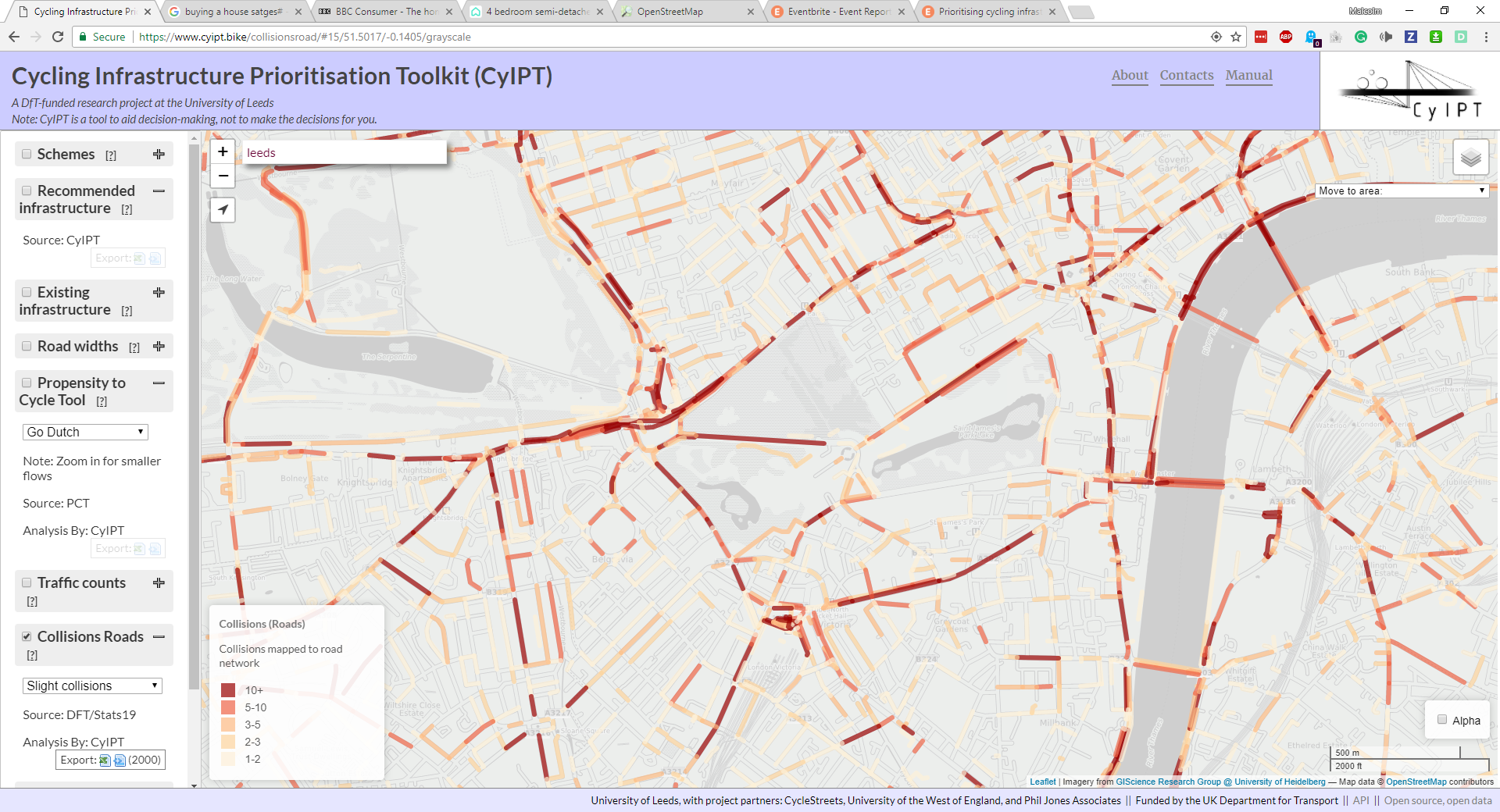 Figure 4.10: The Collisions Roads layer. This layer should be used in conjunction with the Collision Junctions layer. 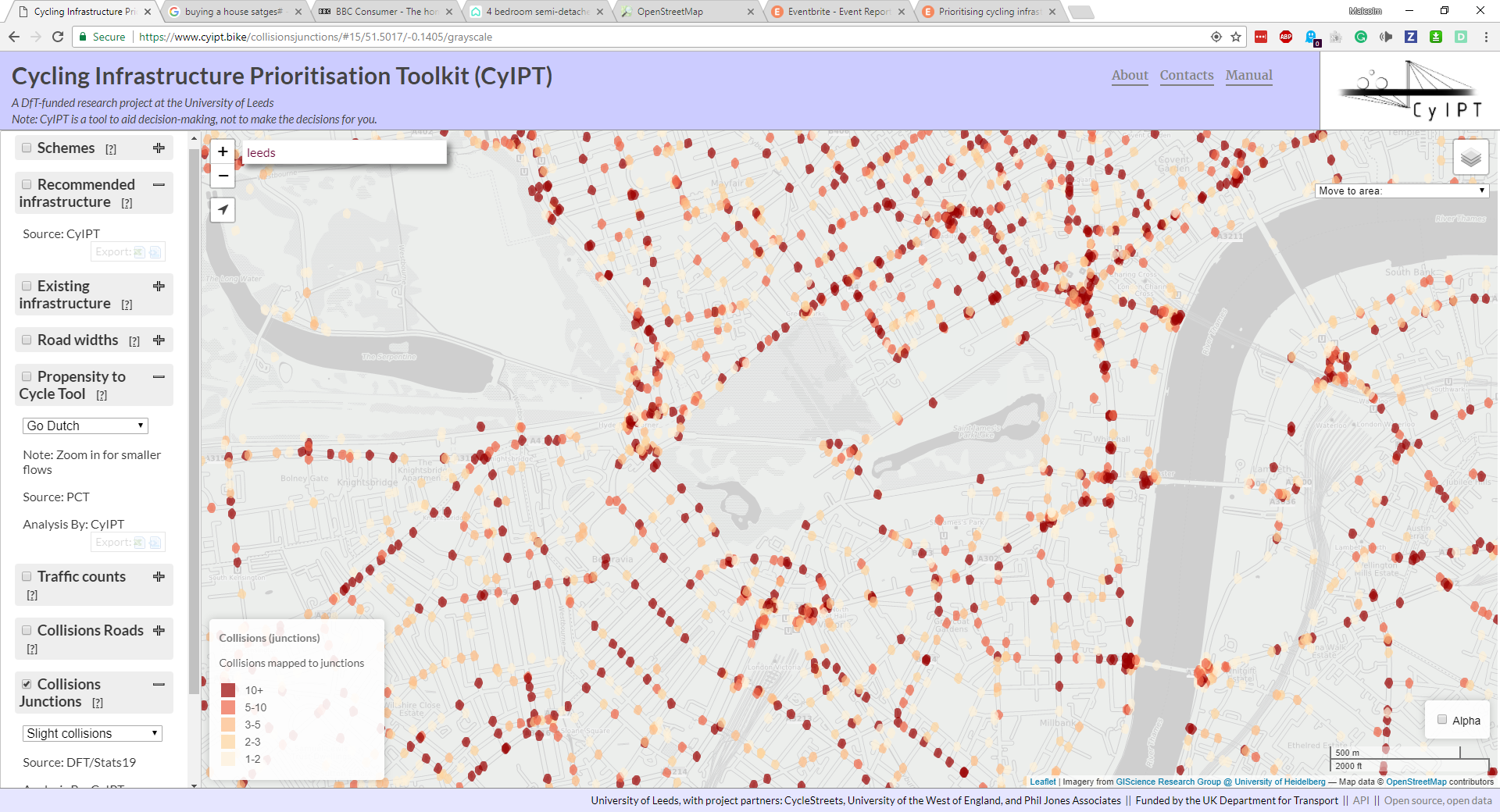 Figure 4.11: The Collisions Junctions layer. This layer should be used in conjunction with the Collision Roads layer.